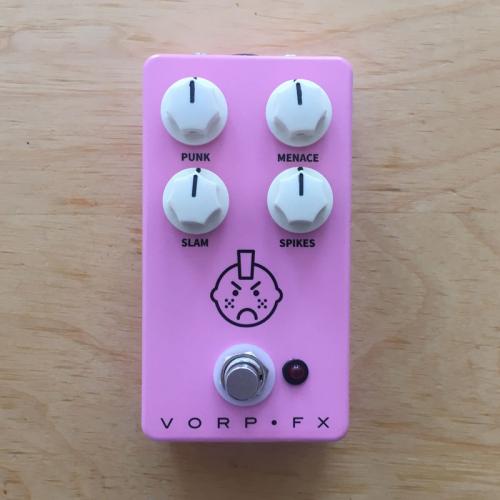 This one started out as a commission. Rick Sell of PureSalem Guitars bought the Fat Cat pedal I had built a while ago and asked me if I could do a clone of the DOD Punkifier for him. The Punkifier is a combination of a DOD250-style distortion and a rather abrasive fuzz in one box with a blend control that allows to mix the two signals. The pedal can do anything from classic distortion to walls of noise. No battery operation; requires a 9V DC power supply.

PEDALS MADE: 1
CURRENT STATUS: OUT OF STOCK
FUTURE AVAILABILITY: MAYBE

The Pink Punk is not really a Punkifier. I looked for schematics online, but didn't find any that appeared to be correct; in fact I only found things that were clearly identified as incorrect. PedalPCB does a PCB called the Pacifier, which seems to be a pared-down Punkifier minus the input/output buffers and with some different components. The version I built is kind of based on the Pacifier, but with a few changes. Not having an original Punkifier at hand complicated the process somewhat as I had (and still have) absolutely no idea whether the Pink Punk sounds anything like the original. The distortion part does have a DOD250 vibe, though a different one than my Double Dodo (which makes sense, as it's based on the late 1990s version with the RC4558 rather than the late 1970s version with the LM741), and the fuzz part is the meanest, most abrasive fuzz I've heard so far.

Rick wanted a pink enclosure, so I had the opportunity to give this pedal a silly name. The punk icon is by Smashicons from www.flaticon.com. 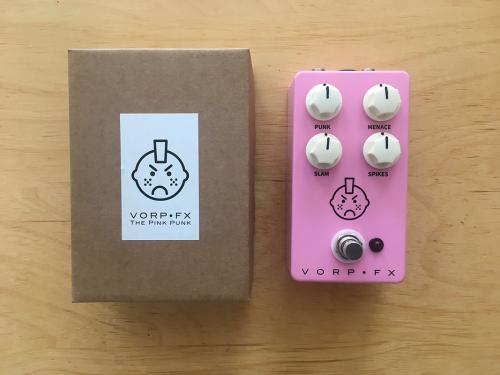