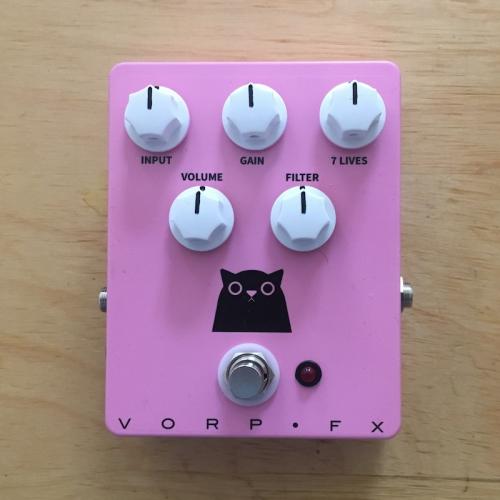 This is my take on the Catalinbread Katzenkönig (built under a CC BY-NC-SA license), a transistor-driven extravaganza, something of a hybrid between a fuzz and a distortion, not unlike a Rat, but with less of a rough edge and somewhat more versatility. Has an input sensitivity control to compensate for pickup input power to make sure this sounds as good on single coils as it does on hot humbuckers. Unlike a real cat, it has only 7 lives, or 7 personalities as you can choose betwee 7 pairs of clipping diodes (varying combinations of Germanium, Silicon and LE diodes, both symmetrical and asymmetrical) for 7 distinct flavours of distortion. No battery operation; requires a 9V DC power supply.

Another one of those experiments. Essentially, what I really wanted to do was to make a pink pedal. Something in the vein of Hello Kitty cuteness, only sounding exactly like the opposite. The Catalinbread Katzenkönig had raised my interest before as it is supposed to be an interesting take on the ProCo Rat (which is probably my favourite distortion), so along came the Fat Cat as my attempt at figuring out how a cross between a Rat and a ToneBender fuzz might sound, and and how that circuit would respond to different kinds of clipping diodes. Lessons learned: it sounds great, and the default Silicon diodes produce the crunchiest, grainest distortion. Still, the sheer power you get out of the LED clipping is mighty impressive, as is the amount of fuzzy white noise that comes from the Tungsram NOS Germanium diodes.

Making this pedal was something of a milestone because it worked instantly without any troubleshooting on my part. All the practice finally seems to have paid off. 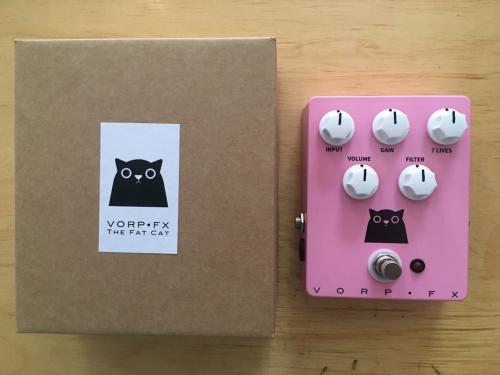