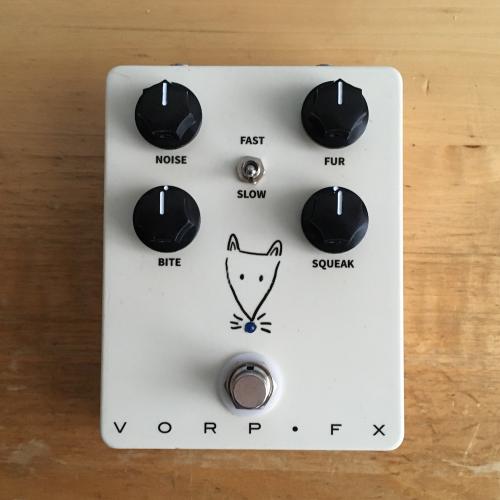 A classic 1980s distortion pedal that features a picture of a white-faced rodent - it should be easy to guess the lineage and the sound. This one adds an optional upper octave that can be dialed in for extra presence. No battery operation; requires a 9V DC power supply.

PEDALS MADE: 1
CURRENT STATUS: OUT OF STOCK
FUTURE AVAILABILITY: MAYBE

This was my second attempt to modify a RAT-type circuit after the Squirrel. With its LM308 opamp, the Rodent sounds definitely more RATtish. It attempts to mimic a classic "whiteface" RAT and adds an octave fuzz that can be blended in. The names of the controls are rat metaphors; NOISE is the volume control, FUR the low-pass filter (because it makes the sound progressively softer), BITE is the gain/distortion control, and SQUEAK the upper octave. SLOW uses the normal silicon diode clipping, whereas FAST uses the LED clipping found in the Turbo RAT. The status LED is cleverly hidden in the rat's nose.

When I started this pedal, it sounded like a good idea and a particularly cute enclosure design; when I finished it, it was the pedal that marked the beginning of the corona virus lockdown in Austria. As a result, a pedal that should have been fun became a symbol for the beginning of a potentially long and dark period of time and the uncertainty of what the future months would be like. If I ever sell the pedal and someone opens it and reads the hidden song lyrics inside, that's essentially why I chose them.

Let's hope we make it through this situation well and hopefully wiser. 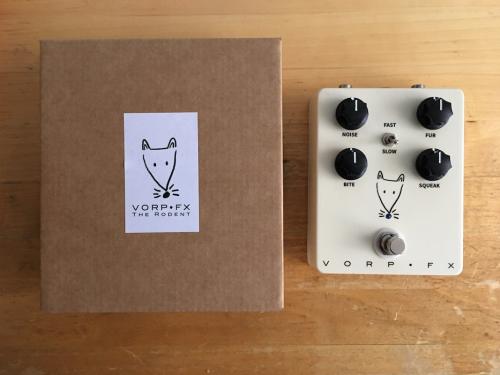