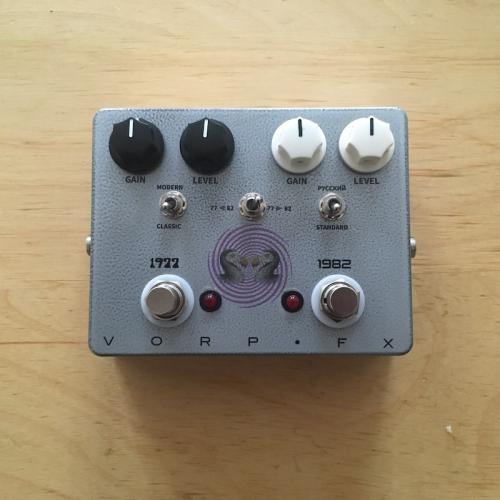 The Double Dodo Timewarp Edition recreates two specific historic distortion circuits (from 1977 and 1982 respectively) in one box. As with the regular Double Dodo, the two distortion stages can be used separately with different settings, or stacked, or one can act as a booster. The 1977 circuit can be used with the original diode type for the original sound or more modern diodes and an additional feedback capacitor for more stability at higher gain settings, and the 1982 circuit can be used with the standard silicon diodes or a pair of Russian germanium diodes. The order of the two circuits can also be selected. True bypass. No battery operation; this pedal requires a 9V DC power supply.

PEDALS MADE: 2
CURRENT STATUS: OUT OF STOCK
FUTURE AVAILABILITY: UNDECIDED

This pedal was the result of some research into the DOD250 circuit. As I had been repeatedly asked about the sound differences between certain versions of that pedal, I decided to build a Double Dodo version that would allow people to find out for themselves. Initially, the idea had been to combine a "gray box" and the 1990s reissue version, but in the end I settled for a different combination, which I felt was more interesting and desirable: the second "gray box" version from 1977, which was the first that I found reliable specs for, and the rare 1982 version with the LF351 opamp, which everybody seemed to agree had the best overall sound.

As for my usual tweaking toggle switches, there's a "classic/modern" switch on the 1977 version because it had a bit of a tendency to go into feedback at very high gain settings, so the standard 1N4001 diodes can be replaced with 1N4148s and a feedback capacitor added for a more stable sound. On the 1982 side, there's a "standard/Russian" switch, which is pure gimmickry: it replaces the standard silicon diodes with a set of Russian germanium diodes for heavier, creamier distortion and a touch of 1980s nostalgia.

A third toggle switch is used to choose the order in which the signal passes through the two circuits. This seemed necessary as they will sound fairly different when the 1982 circuit is in Russian mode.

This turned out to be a very interesting pedal, not just because it replicates two somewhat rare versions of the DOD 250, but also because it sounds really nice. 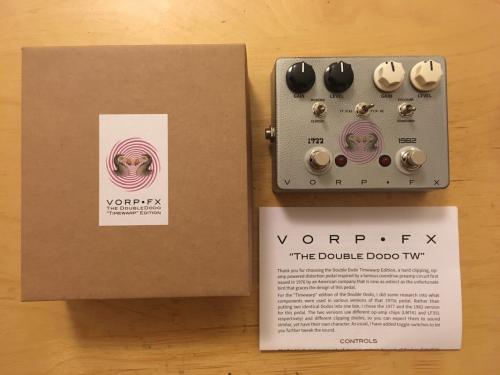