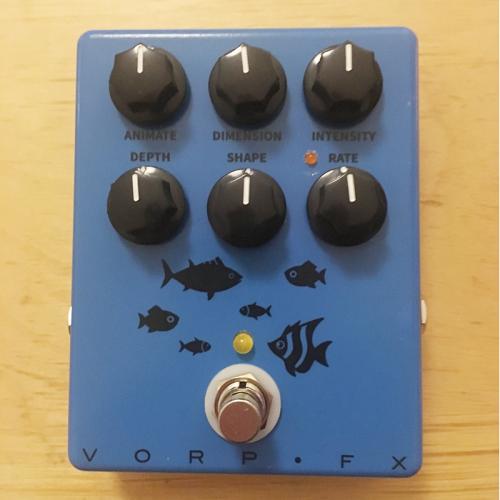 Mostly, this is a chorus, but it's also a tremolo, vibrato and weird pitch-shifty thing that can do hall-of-mirror spaciousness as well as underwater bubbly noise. True bypass. LEDs indicate status and modulation shape and rate. Requires a 9V DC power supply.

The most complex/sophisticated pedal I build up to this point, and obviously, it's not my own design, but rather the Madbean Gravity Wave, which is itself a version of the Earthquaker Devices Sea Machine "super chorus", built because I was interested in the effect but didn't feel like spending the money for an effect I wasn't sure about.

I had been really afraid of having to troubleshoot this because the circuit board is about four times the size of what I usually build and really complex, so I was pleasantly surprised when it seemed to work right away... until I noticed there was an ugly lout popping sound whenever I switched it on or off. Subsequently, I spent about a week troubleshooting it, trying all sorts of things to get rid of the pop, including integrating an output buffer, all to no avail... until I finally saw a fairly obvious mistake I had made that had gone unnoticed all the time - just another one of these things that make you feel really stupid once you've noticed them. Works now.