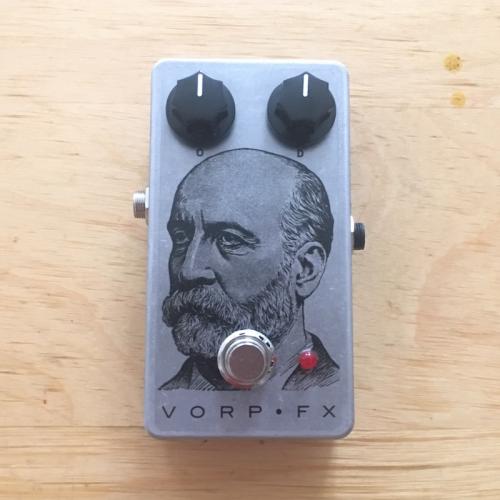 The circuit board inside this pedal was Vorp FX's very first attempt to recreate a rare Japanese distortion pedal from 1977. It is an opamp-based hard clipping circuit with Silicon diodes that excels when it comes to abrasive 1970s-style distortion. The Distortion knob doubles as a Tone control of sorts, as turning it clockwise also adds high frequencies. Works with a 9V battery or a 9V DC power supply.

This was my very first encounter with stripboard; up until then I had only worked with DIY kits that had printed circuit boards. I built this after I had heard Josh Scott demo various 1970s opamp distortion pedals on YouTube, and became interested in the Guyatone Zoom Box, which sounded extremely interesting.

This pedal uses a circuit posted by mirosol, but with a couple of changes because I built this with components that I bought from a local shop and had to go with what they had in stock, and they neither had all the exact capacitors nor the preferred resisitors nor the preferred diodes nor the correct potentiometers. As a result, two of the cap values are slightly off (which means that it has a tiny bit more low end), the resistors have 5% tolerance instead of the usual 1% and are really a bit too big for the tiny stripboard, the diodes were much more precise than necessary, and they were Germanium diodes because my build instructions were faulty. To add to all that, the Distortion pot initially only worked well when wired in reverse because it was the wrong type of logarithmic. The pedal still sounded very nice though, so much so that I immediately decided to build a new, "correct" version of it.

At the time, the prototype circuit board did not make it into an enclosure, as I almost immediately built the second, "correct" pedal, which became the first "real" Beardface (the white one). The prototype's expensive diodes and clipping switch went into that pedal. What remained of the prototype circuit ended up in a parts drawer.

At one point, however, I felt that it was pointless to have this circuit just lying around and decided to resurrect it. I made a new enclosure with correct holes and a different design to reflect its special status. I also decided to do without the clipping switch and make a "pure" version of the pedal, which meant I had extra space inside the pedal that could be used to allow battery operation. I replaced the missing diodes with some that were much closer to the original specs, and I used a different potentiometer that made sure the Distortion knob now worked as expected. The result was a Beardface with a different look and a different flavour, and definitely a huge improvement over having the circuit board lying around in a drawer.