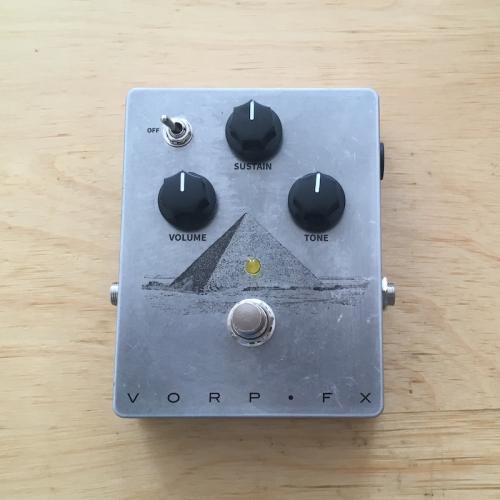 The Pyramid is a a fuzz that is as classic as can be. The triangular imagery is no coincidence. This is heavy transistor-driven goodness with long sustain and a soft fuzzy washiness that blurs and slurs the notes. The toggle switch lets you select flat EQ, mid scoop or mid hump. The Volume knob gives you lots thereof, and there's a reason why the knob that's usually labelled "Gain", "Distortion" or "Fuzz" is labeled "Sustain". Works with a 9V battery or a 9V DC power supply.

Another one of those basic "workshop" editions that I built merely to satisfy my curiosity about a famous circuit and to get some building practice. The role model for this pedal should be obvious. For the design I tried to play with triangular symbolism, resulting in a pedal that I consider to be one of my prettiest. Only one such pedal exists (even though there were two circuit boards, more about which below), and as the original pedal is available again from the original manufacturer at a very decent price, I do not have any plans to build a second one - unless you love the design so much that you want one custom-made for you; in that case, send me an e-mail so that we can sort out the details.

Considering it's not the most difficult of circuits to build, this one gave me a pretty hard time. It's the first time I discarded a circuit board and built a new one simply because all attempts at troubleshooting it were futile. The first circuit board had some seriously weird mojo: there was a strangely pitched hum which I could only get rid of with an extra ground wire that shouldn't have been necessary, and when switched on, the fuzz kicked in and went away seemingly at random. After weeks had passed and I still couldn't find the source of the problem, I finally gave up and built a second circuit board from scratch, which luckily worked right away with no hiccups whatsoever. There is one minor deviation from the original V1 67#1 circuit that this is based on, and that's using a logarithmic rather than a linear pot for the Sustain control as this sounded much better to my ears. 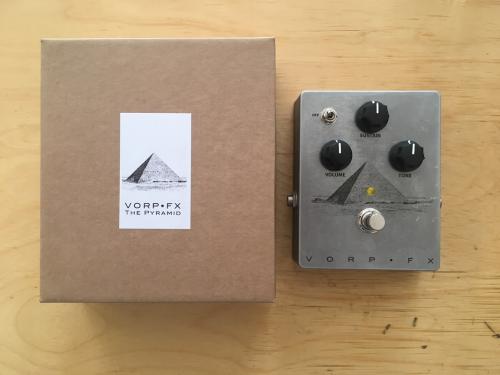