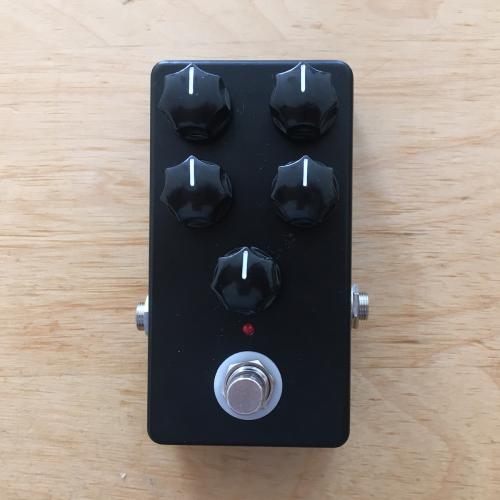 This pedal was made in a very limited edition of three for April Fool's Day 2021, but it's not a joke. While none of the knobs are labeled, all of them are doing something; in fact, they are highly interactive and dependent on each other. You may like or dislike the things it does to your guitar signal, but believe me when I tell you that it's an experience that is not for the faint at heart.

PEDALS MADE: 3
CURRENT STATUS: SOLD OUT
FUTURE AVAILABILITY: NO

At the time and true to their name, the Black Boxes were advertised and sold without any hint as to what kind of circuit they contained. Even the picture of the instruction leaflet did little to unveil the mystery, the only possible hint being its low power consumption. (There was a link to an online document with more useful information on the pedal, but I conveniently obscured it with a pencil sharpener.) 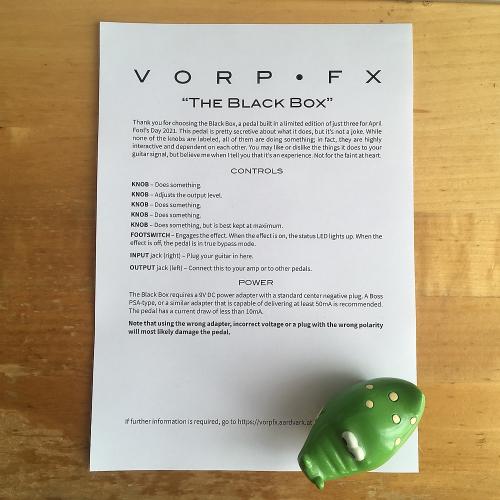 As it happens, the Black Box was supposed to be a recreation of the ZVex Fuzz Factory, but for some reason beyond my control, it ended up becoming a more extreme version of it. When I built the Black Boxes, I had a Fuzz Factory schematic, but no original pedal to compare it against, only stories of how extreme it sounded and how hard to control it was. Well, all three Black Boxes sounded extreme and were pretty hard to get under control, so I thought I had probably nailed the sound.

Two months later, I finally got an original Fuzz Factory and was pretty surprised by how conventional it sounded and how easy it was to control compared to the Black Box. The Black Boxes sounded very velcro-ish, pretty gated and somewhat starved, and while they can produce a variety of fuzz tones and noises, it's near impossible to get a smooth fuzz tone out of them. They will always sound pretty aggressive - in a good way, but also very much like a niche product. It turned out to be a good thing that I hadn't advertised them as Fuzz Factory clones.

I'm not really sure why the Black Boxes ended up sounding so extreme. All three sounded very similar, so it's unlikely I made a soldering mistake or picked a wrong component. The schematic also looked okay. My suspicion is that the germanium transistors, despite being the correct type, might have been too low-gain (in my defence, they were the only ones I could procure for a decent price, and they were not cheap to start with). If this is indeed the reason, then Black Box buyers who find it a bit too extreme should be able to make it more fuzz-factory-ish by buying two AC128 or similar PNP germanium transistors with an hFE≥150 and replacing the transistors in the pedal - they are socketed, so no soldering is required for this modification.

In the end, the Black Boxes turned out to be the perfect April Fool's pedals, and also Black Boxes that were pretty true to their name: not only did the buyers not know what they were getting themselves into, even I happened to build something that turned out to be different from what I intended it to be, most likely because the transistors, while looking like metal cylinders, were, figuratively speaking, also little black boxes. 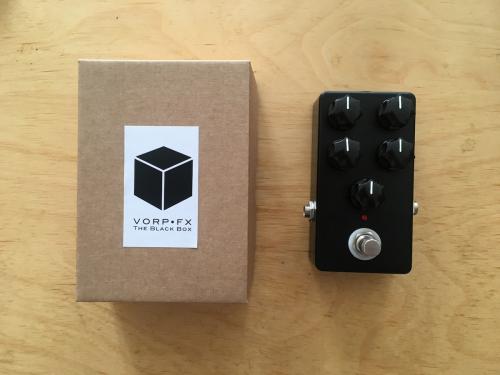